Disclaimer : please, be indulgent, it's my first English blog post ! But if you see some mistakes tell me, I'll be happy to progress.

This is the result of the first challenge of the Historical Food Fortnightly. 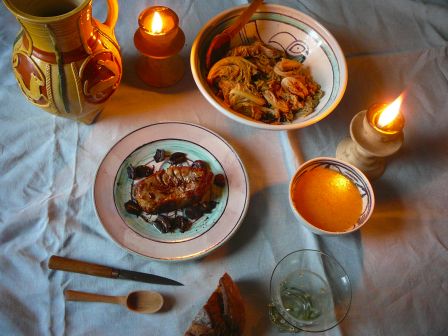 Food is described in great detail in much of the literature of the past. Make a dish that has been mentioned in a work of literature, based on historical documentation about that food item.

The first challenge was pretty difficult because I want to make the challenges with my favourite re-enactment period (12th and 13th century).

Medieval, especially 13th century literature, describes food as a symbolic object. There are a lot of feast or banquets in literature but descriptions often seems like : There were so much food and so good I can't describe or enumerate them.

I looked for a beef with garlic in some recipes books (Le Viandier de Taillevent, Le Ménagier de Paris) and found no beef, but pork with garlic and a sour sauce. Aigret is a sour sauce (sour is aigre in french).

So I made a roast pork with aigret sauce and braised cabbage (because I had to cook cabbage for my sauce).

The Date/Year and Region

Le ménagier de Paris is a French medieval guidebook from 1393.

Le viandier de Taillevent is a recipe collection dated to around 1300.

How Did You Make It

The roast pork recipe comes from Le Viandier de Taillevent :
Garlic is fried in a pan with the pork fat. 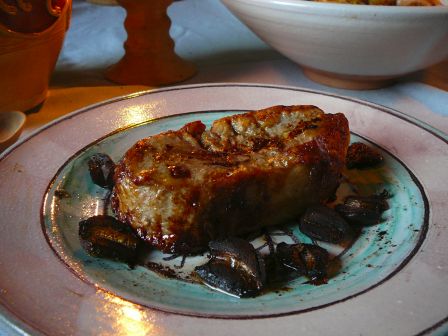 The pork and garlic. Garlic baked too long because my pork was frozen.

The aigret recipe comes from Le ménagier de Paris :
It's a boiled sauce with ginger and saffron, some eau de choux (cabbage bouillon) and roasted bread (to thicken the sauce) and verjuice (I used lemon instead because I didn't have verjuice). 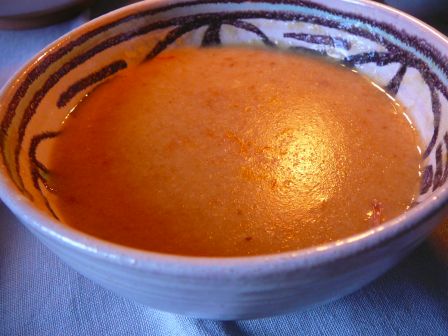 The aigret with saffron's stigma on the surface.

I served a braised cabbage with spices (ginger, galangal, black pepper, long pepper, clove) as I had to cook cabbage to have the bouillon.

About 90minutes but the cabbage had to be baked much longer.

I don't know because I already have all the ingredients. But with spices and especially saffron, the sauce may be a little bit expensive.

How Successful Was It

It tasted good. Especially the sauce ! The garlic was a little bit burned and the cabbage underdone but it was good.

How Accurate Is It

Pretty accurate, except the lemon juice instead of verjuice.

I didn't cook with re-enactment tools because my kitchen is a 21th century one and I can't use pottery.

My problem is that I cook pork instead of beef in my novel ... that's was my dilemma and the challenge is not really done. But I liked this meal and I liked cooked it so I wanted to share it.